Twiterati Troll Amitabh Bachchan Over This Post About Janta Curfew

Twiterati Troll Amitabh Bachchan Over This Post About Janta Curfew

In the post the superstar shared an opinion someone sent him, suggesting that vibration caused by mass clapping can reduce or destroy the potency of the deadly coronavirus. 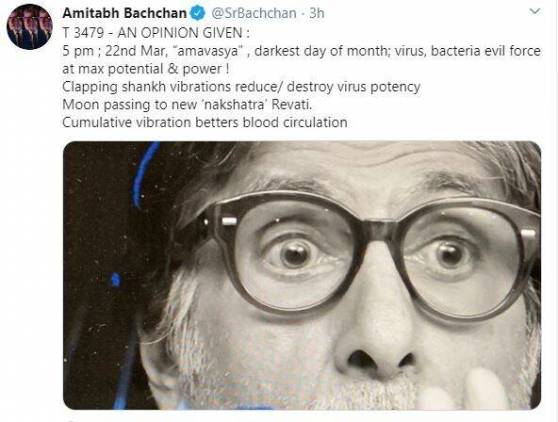 He added in Hindi: "Someone sent this to me. do not know what proportion of this is even true."

However, after facing flak from netizens, the actor soon deleted the post.

One user commented: "I demand an apology from @SrBachchan for spreading misinformation through his Twitter account putting numerous lives at stake. #AmitabhBachchan"

Another user wrote: "Hollywood celebrities like Rihanna, Ryan Reynolds and Justin Timberlake donated millions to fight coronavirus. Meanwhile, Amitabh Bachchan is sharing WhatsApp forward on how noise and Amavasya can kill viruses. What sham these Bollywood celebrities are."

Like most of the people from India, the veteran actor also participated during the clapping ritual on Sunday evening alongside his family. Big B shared a video on Instagram where he was seen clapping his hands standing on the terrace while his daughter Shweta Bachchan Nanda, daughter-in-law Aishwarya Rai Bachchan and granddaughters Navya Naveli Nanda and Aaradhya Bachchan ring bells.

Appreciating the unity shown by our nation, which participated together in encouraging the working staff like doctors, cleaning staff and delivery boys by clapping hands, ringing bells and banging utensils, Amitabh Bachchan wrote a poem on his blog.

He wrote: "Questions in blue .. for it had been true ..what we witnessed in prime .. was a nation divine .. united in one .. nothing undone ..historic in its conclusion .. never an ablution ..not a spectacle in view .. national resolve and fight ..we worked for humanity .. with utmost clarity ..our differences apart .. coming together to start out ..this historic revolution .. be same be one be one creation .. !"

Also Read: These actresses have been Vaani Kapoor's Biggest Inspiration

The megastar concluded with a message for his fans, saying, "Love .. be safe take care .. be in prevention."