Chhapaak In Yet Another Controversy; Netizens Claim It An Anti-Hindu Film

MUMBAI: Just two days before the release of the social movie 'Chhapaak', it has been surrounded by a number of controversies. Earlier, Deepika Padukone was criticized for promoting her film (in a way) at JNU campus where we all know that things are far from being normal. Now, netizens are not happy as the makers have changed the name of the real acid attacker Nadeem Khan.

Not just this, making the matter worse, it came to be known that Khan's name has been changed to Rajesh and thus people were quick to jump to conclusions claiming it an anti-Hindu film. Taking into account the present state of our country, it seems that the makers have made a big mistake with this name-changing stint and while we can say that they might not have any bad intention, it did come out in a wrong manner. Even if they would have given a Muslim name, that too would have resulted in another controversy.

Twitter has been flooded with several angry as well as sarcastic comments on the same where users are questioning the makers' trail of thoughts while replacing the original name with a new one. See some of the reactions here:

Hey @deepikapadukone what is the name of person in movie who attacked girl ? Heard "Rajesh" instead of Nadeem Khan.. how can you stoop such a low..
How can you portray Hindu name..
Shame on you !!#boycottchhapaak https://t.co/vZh89BZ122

Understand the chronology.
- Chhapak film is based on Laxmi Agarwal an acid attack survivor.
- Nadeem Khan is the name of the person who throws acid in real life.
- In film name is changed to Rajesh ... a Hindu name
So Deepika's visit to JNU is not surprising.#DeepikaPadukone pic.twitter.com/QkBmNUKZWL

If Bollywood makes a movie based on true events of 9/11, they'll portray Osama Bin Laden as Om Prakash Tiwari.

Name of the guy who attacked Laxmi Aggarwal with acid was Nadeem Khan.
But makers changed his name to
" Rajesh" to suit their agenda
This is how Machinery of anti Hindu Bollywood gang functions...

Boycott these secular traitors of our Country pic.twitter.com/zfgLGOL0Ku

Laxmi Agarwal was attacked by a 32-year-old man named Nadeem Khan back in 2005 when she was only 15 years old after she constantly rejected his marriage proposals. After the acid attack, she survived the incident and became a big inspiration in the entire world for rigorously fighting against the acid sale and also putting Nadeem behind the bars.

'Chhapaak' is the story of Laxmi being told on a cinematic platform. Deepika as Malti is all set to narrate the struggles of her life. However, the actress faced a lot of negativity for her promotional stance in Delhi as several hashtags like #BoycottChhapaak trended and to counter the same, her fans came up with #ISupportDeepika. 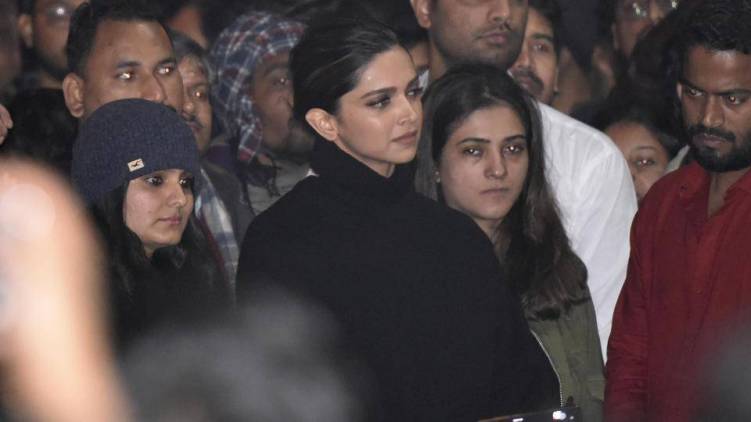 Regarding the JNU protest, Deepika, in an interview, said, "I feel proud to see that we aren't scared to express ourselves... I think the fact that we are thinking about the country and its future... Whatever may be our point of view, it's nice to see. I feel proud about it that people are coming out -- be it on the streets or wherever they are -- they are raising their voice and expressing themselves as it is important. If we want to see a change in life and society, it is important that a point of view be put forward."