Did Asha Negi And Rithvik Dhanjani Confirm Their Breakup Through This Post?

Did Asha Negi And Rithvik Dhanjani Confirm Their Breakup Through This Post?

MUMBAI: For the last few days, the rumour mill has been going wild with news of the couple, Rithvik Dhanjani and Asha Negi breaking up. In fact, Rithvik had posted a cryptic message as a post a few days ago regarding how 'normal wasn't working' and the 'yoga of love'.

Meanwhile, Asha Negi who has been pretty tight-lipped regarding the entire situation also shared a cryptic post on her social media handle. She took to Instagram stories to share a post that reads, "hey, quick question. what the f**k is going on." 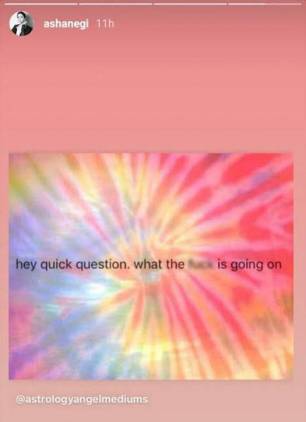 The duo was in a relationship for more than the duration of 6 years. It is alleged that trouble began arising from the previous year. The two have otherwise had always been in the habit of sharing each other's pictures in their official social media accounts. Unfortunately, that practice has stopped now, which made the breakup rumours seem even more true.

However, none of the previous posts by the couple have been removed from their accounts either. A source close to the couple had earlier reported, "Earlier, they would often hang out with their friends, but Asha stopped doing it about a year ago, barring special occasions. Something was amiss in their relationship for quite some time. In fact, both knew that the relationship was over long before they decided to move on. It looks like they outgrew each other."

The source didn't fail to add how in spite of everything, the couple has still managed to handle it all maturely, "Having said that, they have handled the situation maturely. Both of them haven’t told their friends, but they are aware of it. However, they don’t question them on their relationship status."