MUMBAI: Akanksha Puri, became the part of the limelight due to her unconventional relationship with Bigg Boss contestant Paras Chhabra while he was in the reality show is ready to move on and is not afraid to flaunt it!

The couple was in quite a serious relationship until Bigg Boss happened and everything fell apart for them. While Paras persued Mahira Sharma, another Bigg Boss contestant, Akanksha was left heartbroken outside the Bigg Boss house. By serious we mean, as serious as tattooing each other's name in their bodies! 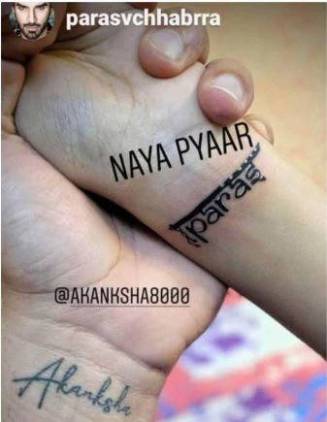 However, Akanksha has now got her tattoo containing the name of 'Paras' removed. She replaced it with another tattoo which says 'Being Me' along with a bar code. Sources close to her have revealed that she is extremely happy with this change. Even in the eyes of the media, Puri has been often seen making it very clear that she is ready to move on to the next phase in her life. 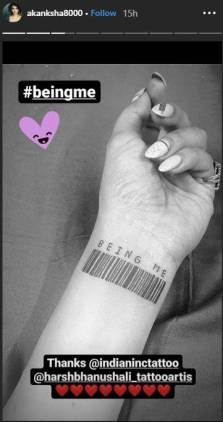 On being enquired about the same Akanksha revealed, "It's my time. I am dating my work and loving myself like never before. I am just #beingme in a world where everyone is trying to be fake and something else. Because you can never fail at being yourself so I am #beingme. I have got my name with the bar code. The below that I have written being me has been my hashtag for years"

While she is all about spreading positivity and welcoming new changes, her ex-Paras Chhabra was recently seen bad-mouthing her in a recent interview.
Also read: She Acts Heartbroken With Heavy-Makeup On: Paras Chhabra On Ex Akansha Puri

Career-wise, Chhabra along with another of his co-contestant from the house, Shehnaaz Gill has become a part of a 'swayamvar-themed' reality show on Colors called 'Mujhse Shaadi Karoge'.