MOUNT MAUNGANUI: With the fifth and the last T20I match of India vs New Zealand series, the Men in Blue script record with a historic 5-0 win. However, Indian cricketer Shivam Dube created another record of giving out the second-highest runs in an over. The list is still topped by England's Stuart Broad who apparently has forgotten the history he made.

Dube bowled only an over and it read 6, 6, 4, 1, 4nb, 6, 6. Yes, this was the only over of Shivam where he ended giving away 34 runs just when the Kiwis needed a big over. With this, you might instantly remember Yuvraj Singh and Stuart Broad from the 2007 match that made Yuvi as the sixer king smashing six sixes on an over of Broad.

International Cricket Council (ICC) posted regarding the same and wanted to jog the memories of cricket fans to see if they remember who gave away the most runs in a single over. Along with the picture of Shivam Dube, ICC wrote, "6, 6, 4, 1, 4nb, 6, 6 = 34 runs.
Shivam Dube bowled the second-most expensive over in T20I history today! Do you remember the first?"

While everybody seems to know the trivia, Stuart himself has forgotten about the player conceding the maximum runs. He comically replied to the post by writing, "nope". 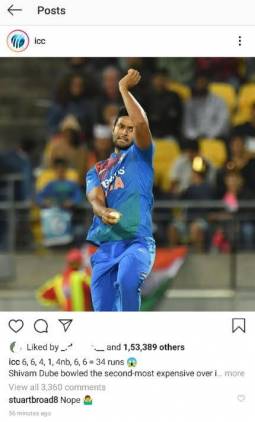 Haha! Probably this is the spirit of cricket where one can make a joke on himself.

England's pacer faced the wrath of former India's left-handed batsman on 19th September 2007. With this, Yuvraj became the player to have scored the fastest fifty in a T20 match and he still holds the record. An unbeaten 12-ball half-century!

Talking about India's tour of NZ, the Virat Kohli led squad created a record of being the only team to have won a T20 series with an undefeated 5-0. Next, both the teams will face each other in 3-match ODI series starting from 5th February to be played on Hamilton's Seddon Park.