NEW DELHI: Karnataka star Mayank Agarwal has been included in the Indian squad for the upcoming 3-match ODI series against West Indies. Agarwal is stepping into the shoes of injured Shikhar Dhawan and will be replacing him for the series.

Agarwal has been in great form until now in both the formats, limited-overs as well as Test matches. He scored two smashing double centuries in the Test series against South Africa and also knocked a massive hundred against Bangladesh in the same format. Besides, even in domestic cricket, he scored match-winning 69 runs for his Karnataka team against Tamil Nadu in the Vijay Hazare Trophy. 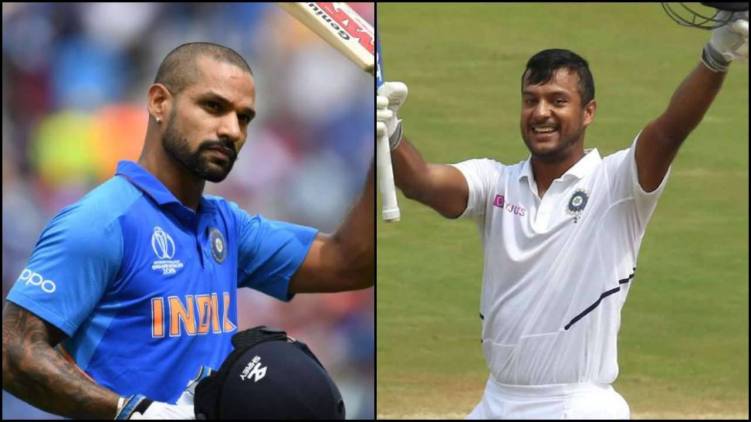 Shikhar Dhawan was injured while trying to catch a ball in Surat, playing against Maharashtra during a Syed Mushtaq Ali Trophy game. He suffered a deep cut on his left knee and that eventually resulted in his exclusion from the Indian team. "While Dhawan's stitches are off and his wound is healing gradually, he still needs some more time before he regains full match fitness", said BCCI medical team on Wednesday.

Kerela star Sanju Samson made his way to the team as his replacement in the ongoing T20I series against Windies whose deciding match will be taking place on 11th December at 7 pm.

The 3-match ODI series will start on 15th December in Chennai. The second will be on 18th December in Vishakhapatnam followed by the third one on 22nd December in Kolkata.

Also Read: Will Rohit Sharma Be Back In His T20I Form Against West Indies?

It will be interesting to see if the captain decides to send KL Rahul along with opener Rohit Sharma or will it be Agarwal at number 2.