Rohit Sharma holds another record in India VS Bangladesh

RAJKOT: 85 off 43 balls! Rohit Sharma played his 100th T20 International and made sure it was a memorable one. His massive knock of 85 runs consisted of six fours and six sixes that lead India for eight-wicket victory over Bangladesh. With this Hitman creates another record!

However, Rohit, though, was a few runs behind from completing his century in the match, this in itself was his special 'century' as he played his 100th T20 International on Thursday. He is the only Indian and second world cricketer to have reached this number after Pakistani skipper Shoaib Malik who has played matches in this format.

On this, the Indian skipper and T20 captain said, "First thing I never thought that I would play so many matches. I am thankful for the opportunities I have been getting from the past to now. The journey has been a long time since its debut. During this time I have seen many ups and downs. I have understood my game now. I am very happy with where I stand at the moment." 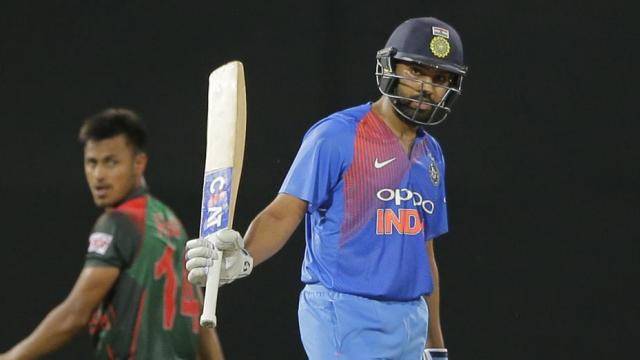 Winning the second game of the three-match series, India levelled it 1-1 after facing a shocking defeat in the first match. Bangladesh gave an easy target of 154 runs and Sharma contributed more than half in it. India chased the target in only 15.4 overs and now their next target will be the final game again Bangladesh that will be on Sunday, 10th November.

Also Read: IPL 2020 To Be Bigger And Better With The Game-Changing 'Power-Player'

Fans were too excited to witness Sharma's fifth century but he was out while trying to hit his seventh maximum. Indian bowlers were exceptionally good and managed to restrict the opponents to a total of 153 runs for 6 wickets.

After Hitman was sent back to the pavilion with a total score of 118 on the scorecard, KL Rahul and Shreyas Iyer completed the formalities and had 26 balls to spare.

On the other hand, Bangladesh was not off to a good start and it was because of Mahmudullah Riyad whose 30 runs off 21 balls helped them to cross the mark of 150 runs.

We congratulate the team on this win and wish them all the best for all the upcoming matches!