India wins its second ODI against West Indies by 107 runs

VISAKHAPATNAM: After losing the first one in Mumbai, the Indian team keenly eyed on leveling up the 3-match ODI series against West Indies. The second ODI in Vizag saw Indian batsmen as well as bowlers in their best forms and thus tying the score with 1-1.

The match held on 18th December on the Indian turf was definitely a treat to the eyes of Indian fans. The Virat Kohli led squad won the match by a big difference of 107 runs. Rohit Sharma, KL Rahul, Mohammad Shami and Kuldeep Singh emerged as the stars of the match. With Sharma and Rahul's whooping 159 and 102 runs respectively, India managed a huge score of 387 runs with Rishabh Pant and Shreyas Iyer's great contributions.

Also Read: IND Vs AUS ODI: Marnus Labuschagne In The Australian Squad; Maxwell And Stoinis Out! 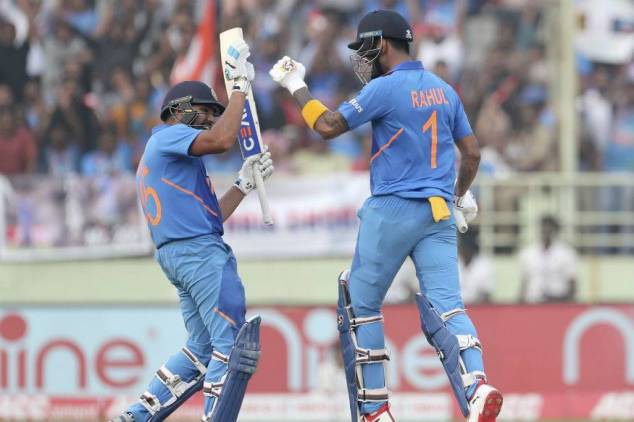 Coming to the bowlers, Kuldeep Yadav claimed a hat-trick and with this becomes the first Indian player to have got two hat-tricks in International Cricket. Mohammad Shami was the star bowler with his 3/39 bowling performance in 7.3 overs. Jadeja also took two wickets but gave away 74 runs.

However, in the end, the bowler sent back all the Windies back to the pavilion in just 43.3 overs, marking India's victory for the second ODI of the series. The decider match will be on 22nd December in Kolkata and we hope for the men in blue to continue their excellent form. Captain Virat Kohli was surely happy about the win and praised the batsmen who successfully put up a big total on the board. He said, "I think it all boils down to the good foundation. Rohit (Sharma) and KL (Rahul) were outstanding, the opening partnership set it up. Shreyas and Rishabh, the way they played and scored 55 runs in that two overs... It was fantastic hitting. Credit has to go to the openers. It’s been very nice to see the way we batted first, especially after losing the toss. It shows we’re not reliant on the toss. We want to bat the opposition out of the game if we bat first."

Kohli, however, was a bit disappointed with fielding efforts as the match saw many misfields and dropped catches. He said, "We need to field better... We can’t afford to drop catches like we have. Fielding is about wanting the ball, as long as we enjoy ourselves, we’ll be right up there on the field as well. Catching has been disappointing. It is not the representation of the kind of standards that we set. It’s very important to maintain standards and live up to them. We are one of the best fielding sides in the world."