Ajay Devgn recently released the first look of his 100th movie Tanhaji: The Unsung Warrior and going by the poster, the movie is going to be a grand affair. Directed by Om Raut, the movie is set in 17th century India and follows the life of Tanhaji Malusare, the military leader in the army of Chhatrapati Shivaji Maharaj.

Apart from Ajay Devgn, who will be essaying the titular role, the movie also features Saif Ali Khan in a pivotal role and Kajol in a guest appearance.

Ahead of the trailer release, the makers of the movie unveiled the first look of Saif Ali Khan who will be playing the antagonist in the period drama.

Sitting on the throne, donning shades of grey and black, with kohl-lined eyes, long hair and a menacing expression- Saif Ali Khan makes a convincing villain. However, his manner of wielding the sword quickly reminded fans of another handsome man, who appears almost every time sporting a solemn expression- Jon Snow.

Tanhaji is famous for his role in the Battle of Sinhagad in 1670 AD. The military general met his end while winning the Kondhana fort from the Mughals for the Marathas during the battle.

Saif Ali Khan will be playing the character of Udaybhan Rathod, who is on the opposite end in the battle of Sinhagad against the Marathas.

The climax of the movie will reportedly feature an intense fighting sequence between Ajay Devgn and Saif Ali Khan where they will be seen locking swords. 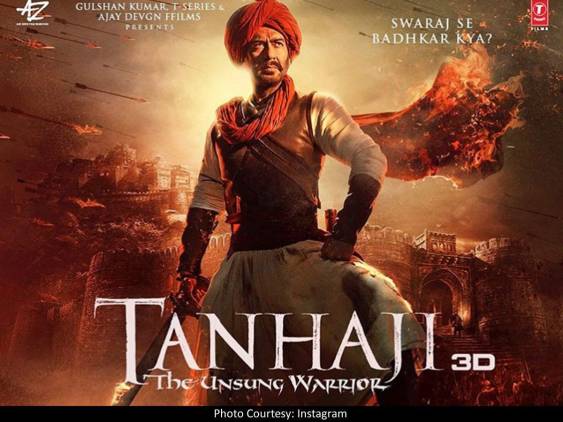 Tanhaji: The Unsung Warrior is scheduled to hit the screens on January 10, 2020, and will be clashing with Deepika Padukone’s ‘Chapaak’.

The trailer of the movie will be released on 19 November.

The biographical period drama is produced by Ajay Devgn and Bhushan Kumar’s T-series.