MUMBAI: Actress Kiara Advani tickled the funny bone by sharing a photograph showing how she dresses up for video calls.

Kiara took to Instagram stories where she shared an image of herself, which appeared to be either taken during a photoshoot or during an occasion. 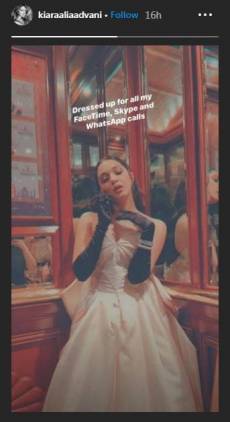 In the picture, Kiara is seen wearing an elegant white gown paired with black gloves while she's holding her phone.

She captioned the image: "Dressed up for all my FaceTime, Skype and Whatsapp calls".

On the acting front, Kiara was recently seen in Netflix's film "Guilty".

She will next be seen in "Bhool Bhulaiyaa 2" directed by Anees Bazmee. It also stars Kartik Aaryan.

Also Read: Masakali 2 With Sidharth Malhotra And Tara Out Now; Twitter Is Outraged

"Bhool Bhulaiyaa", directed by Priyadarshan and starring Akshay Kumar with Vidya Balan and Shiney Ahuja, was released in 2007. The film was a politician remake of the 1993 Malayalam film "Manichitrathazhu".