Big B Seems Confused By The Millennial Lingo In Bhumi's Compliment

Big B Seems Confused By The Millennial Lingo In Bhumi's Compliment

MUMBAI: It seems like veteran superstar Amitabh Bachchan was left quite confused after actress Bhumi Pednekar showered some praises at him. She apparently called him 'the most baller person ever' and the actor seems completely baffled by the statement. Not only this but the Bhumi has done it twice already!

Earlier today, i.e. Thursday, May 28, Amitabh Bachchan updated his official Instagram handle where he compared his current self from what he used to look like around 44 years. The superstar actually shared a still from his earlier films called 'Kabhi Kabhie' that came out in the year 1976. Alongside it was a picture of him in the attire he is donning for his upcoming release 'Gulabo Sitabo'

Bhumi was ane of the people who happened to comment below the picture where she wrote, "4 years later and still giving us such memorable characters. I'm telling you, you are the most baller person ever."

This is the second time Bhumi used the lingo 'baller' to describe Bachchan. Clearly, the actor seemed very confused because this is how he responded! 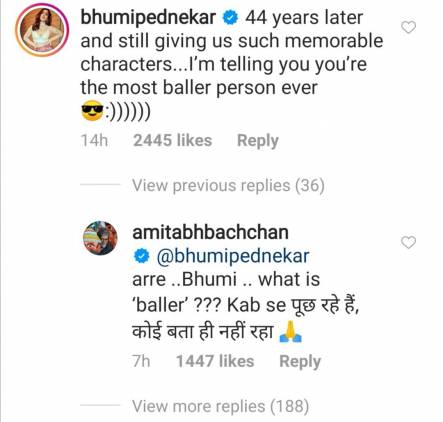 Most users definitely agreed to what Bhumi was saying meanwhile others explained the start what 'baller' means.

Also Read: Ranveer Singh Reflects Upon How The COVID-19 Pandemic Affected Him

One of the netizens replied to his comment, "Baller means extremely good or impressive."