RICHMOND: A stealing act was carried out in a Richmond music store. When cops were called after watching the CCTV footage, they decided to share the video with the thief's face on Twitter.

Look sharp! In a moment that fell flat for music store employee - suspect stole a mobile phone when employee was attempting to tune up a sale. He also stole a clarinet before ending this criminal performance. Call (804) 646-1010 and sing a sweet song if you can identify him #RVA pic.twitter.com/ZlD8oHdJ8z

After this video went to gain some viewership, the thief on Wednesday left a bag at the gate of the store from where he stole the phone and the clarinet and he left both of the items inside the bag along with an apology note. 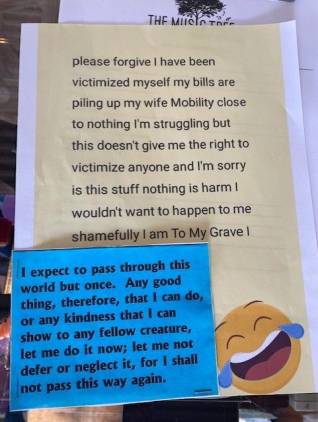 "While we believe it is a rare occurrence for a suspect to return an item,"

"The power of social media can often encourage people to do the right thing."

When he viewed the tape it just felt very uncomfortable watching it.

Come to find out that the clarinet was a gift from his grandmother when he was 16 years old, 22 years ago.

I am just happy that he did the right thing and realized the errors of his ways and brought it back.

Also Read:  A Dozen Bottles Of Wine Were Sent To Space: Here Is Why