Deadly floods have hit the capital city of Indonesia, Jakarta. As per recent reports, 23 people are confirmed dead and over 30,000 people are homeless after a forced evacuation. Indonesia’s disaster mitigation agency (BNPB) has declared the cause of these deaths to be hypothermia, drowning and landslides. Four individuals have also died due to being electrocuted through live powerlines. Soekarno-Hatta, Indonesia’s domestic airport was also shut due to the floods, due to which about 20,000 passengers were left abandoned.

Badan Meteorolog Klimatologi dan Geofisika (BMKG), Indonesia’s non-departmental government agency for meteorology, climatology, and geophysics has done it’s research and found out that the country has received 14.8 inches of rainfall in a day. It has been recorded as the day with the most rainfall after the year 1996. They also suggested the cause of the rains, which could be the amount of water vapour in the atmosphere being high and monsoon season. The rainfall is expected to continue through the coming weekend. 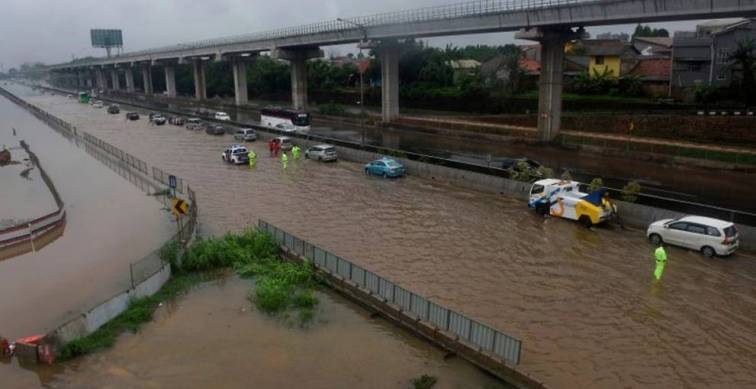 Due to the unfavourable forecast, Anies Baswedan, the governor of Jakarta announced, “About 120,000 rescuers have been deployed to evacuate those affected. Mobile water pumps are also being installed as more downpours are forecast in coming days. The city administration would complete projects intended to complete flooding  on the two rivers, including a dam and a sluice.”

These intense floods have also brought forwards the poor infrastructure issues of the country as it struggles to attain foreign investment. The city of Jakarta is home to 10 million people. If people in the metropolitan areas are also counted then the population adds up to 30 million. Back in August 2018, President Joko Widodo stated, “The capital will move to a site in sparsely populated East Kalimantan province on Borneo island.” Borneo island is known as the third largest island in the world.