LAS VEGAS: The CES 2020 convention is still going on in the city of Las Vegas.The products featured in the show are proving to be extremely revolutionary and catching a lot of attention due to the innovative technologies being used in them. The event is still going strong even on it’s third day. Here are our picks of some major highlights and world changing gadgets that were revealed in the ongoing tech convention:

Samsung took the stage yet again to announce their new line of portable hard drives known as the T7 series. They’re the follow-up of the T5 range that emerged in the markets back in 2017. What stands out in this T7 line of SSD is that, they contain fingerprint sensors. The fingerprint sensor will provide extra security and help protect the data of the user. The T7 line will contain 2 models i.e. the T7 and the T7 Touch. The prior will not have the finger print feature. Although both these models will have the read speed of 1050 Megabytes per second and write speed worth 1000 Megabytes per second. This means, the T7 series will have double the speed of formerly released T5 range. The drives will hold the capacity of 2 Terabyte.

2.    P&G Venture: A Skincare Device That Will Act As Photoshop For Skin

Proctor & Gamble ventures, most commonly known as P&G ventures introduced an inkjet printer for the skin. This product also acts as a skincare product as it will hep skin’s hyperpigmentation disappear and it will also help fade spots with passing time. What is unique about this product, is that they are super portable and handheld devices. Priced at $599, the product will go on sale during the summer of 2020.

At the event, Google took the stage to announce how for three years they have been building up a team consisting of 2000 people in order to test out google prototypes and services from Google. This is being done so that the company ensures that every product google creates, be it smartphones or personal assistant, it should be inclusive to people of different shape, sizes, colours and ethnicities. Hence, a team of 2000 diverse people have been selected to do so. Google’s Product inclusive head,  Annie Jean Baptiste was seen saying at the event, “No matter where you come from, what you look like, we’re building for billions of users. We’re building for everyone.” 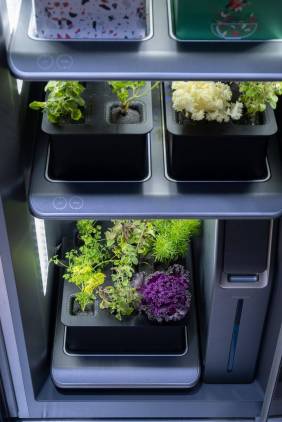 The product is still a prototype as of now, but in the coming future, the Bespoke Plant Fridge will have the ability to grow plants and vegetables inside it. As per Samsung, the fridge can hold up to 45 different plant varieties. The plants will contain their own pods and the fridge also contains a unique water filtration system. What makes this feature innovative is that, the plant pods will contain QR codes with the information of the plant in it. Based on that information, the irrigation system will supply that specific amount of water to the plant accordingly. This product is a perfect merger of a fancy kitchen gadget and high-end science experiment.

5.    Twitter: Customise Who Gets To Reply To Your Tweets Now

Twitter says you’ll have the option to receive replies *only from people you follow.* Could solve a lot of abuse and harassment issues in one fell swoop https://t.co/QNwkiwZH8Y

Director of Twitter’s product management, Suzanne Xie spoke at the event. She talked about all the changes that are coming to the social network platform this year, which will be conversation based. She mentioned that users will now have 4 options as they share a tweet. These options will be “Global, Group, Panel, Statement”, while 'Global' will let anyone reply, 'Group' means only the people in your follower’s list can reply, 'Panel' is for the individuals you have tagged in the tweet and 'Statement' will let no one reply. Xie added, “Twitter is in the process of doing research on the feature. The mock ups are going to be part of an experiment we’re going to run.”