NEW DELHI: Four years ago, Jasleen Kaur, a student of St. Stephens College, accused Sarvjeet Singh of passing obscene comments on her. She took to her social media to post a picture of the man calling him a harasser. Now, after four long years, justice is finally served to Sarvjeet and Delhi’s Tis Hazari Court has finally acquitted him of all charges. Jasleen failed to prove her accusations and as a result, the Delhi court freed the youth from all the alleged allegations under which cases against Singh were filed.

Sarvjeet expressed his happiness via a Facebook post and announced that he has been proven innocent. He wrote, “The Verdict is out. I am ACQUITTED! I wish to thank Waheguru ji for keeping His eye on me, and all of you for your tremendous support. My friends and well-wishers made it possible. He thanked his mother for always standing by him, and also thanked Shikha Khanduja Kaul, who wrote a book on Sarvjeet’s experience. Most of all, my mother who stood by me like a pillar. Her faith in me was the major driving force that made me see each day with courage. And of course, Shikha Khanduja Kaul who has guided me through this. She is like an elder sister I never had. The book she has written on my case will be out soon!” 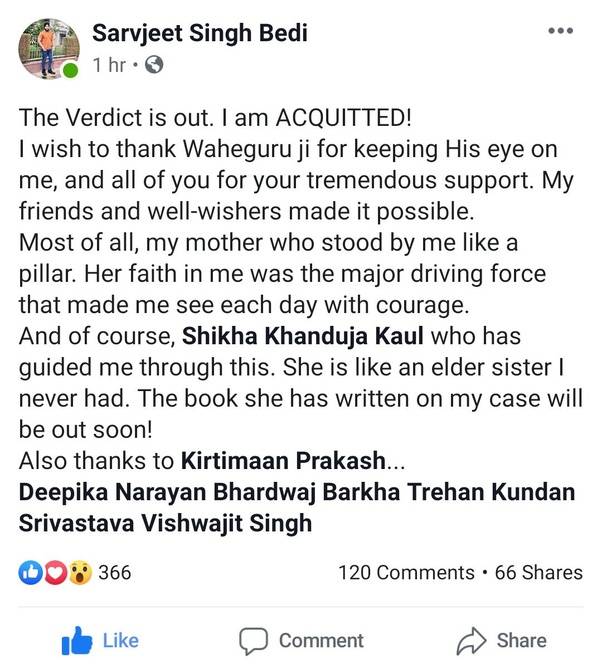 Shikha Khanduja Kaul wrote a book over this case in which she has mentioned that no fake feminism can win over justice. Yes, that has been proven well enough. The people were quick to judge Singh after the case went viral and called him “Delhi ka Darinda”. But, we all know sooner or later, the truth does prevail and he has been declared: NOT GUILTY!