Everything that is wrong with society

The recent horrific incident where a 26-year-old veterinarian doctor from Hyderabad was brutally raped and murdered has left the nation weeping. As people from all over the country are enraging over the plight of women in India, a self-proclaimed filmmaker has given a piece of unsolicited advice to women to "tackle" sexual assault and murder. In a shocking statement  Daniel Shravan has said that instead of dialing 100 and seeking help, women should carry condoms in order to save themselves from rape.

In a repugnant understanding of sexual assault, the man said: “Rape is not a serious thing but Murder is inexcusable”. 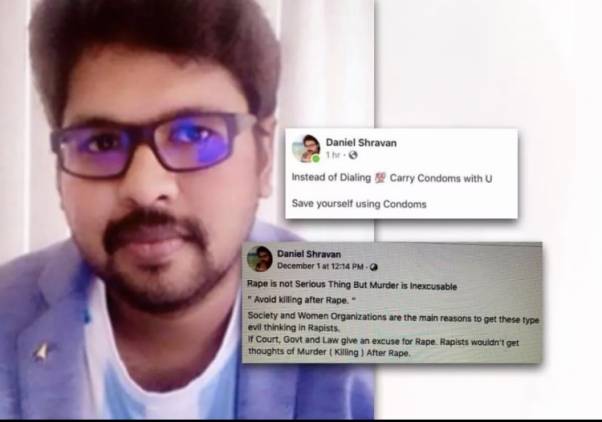 His posts, that reek of malicious thoughts have been removed. Singer Chinmayi Sripaada shared the screenshots of these posts on social media and they are enough to leave anyone seething in anger. The filmmaker said society and women organizations are“real culprits for engendering the evil thinking of killing the rape victims after raping them”. In his posts, he also says that if the government provides an exemption for rapes, then rapists wouldn’t think of murdering the victims.

Ideas going around.
Some of this content is in Telugu. Basically the ideas these men have given is - cooperate and offer condoms to prevent murder after rape, women’s organizations are the reason for rape.
Rape is not heinous, murder is. pic.twitter.com/2eqhrQA02T

The man then says that legalizing “Rapes without violence” is the only way to control the brutal killings. “Murder is a sin and a crime. Rape is a corrective punishment. No justice is going to happen with Nirbhaya Act or Priyanka Act. The agenda of rape is fulfilling the sexual needs of rapists based on that time or mood.”

We urge women around him to find their way back to safety.

When he was asked to consult a psychiatrist for his mental condition, he replied: “If these adamant bitches didn’t consent to the proposal made by the rapists, they will have no other way but to rape them”.

Also - He would advice the same to his own family.

Content in Telugu. “Sick if these women’s drama. Will they rape if they accept our proposal?”

Poiny is if women say no to deviants like him, rape is the only option for “Adamant bitches” pic.twitter.com/BRHYNXmSB0

Men like Daniel Shravan are a threat to the women of this country. His perverse understanding of rape and crime against women represents everything that is wrong with society. His thoughts mirror that of a potential sexual offender. He has reduced the status of women to that of a cattle, devoid of a will and rights. Men like him cannot be trusted to roam the streets without shackles!