Ayushmann Khurrana is on a roll! From Vicky Donor to Bala, the actor is giving us more reasons to fall in love with him. When he is on the screen, we don’t see ‘Ayushmann the star’, but Akash, Nakul, Pooja or Mudit. From one character to the next, he transforms like a chameleon.

He certainly doesn’t have a repetitive acting style, but one thing that is common to all his movies is his enigmatic smile. (Wait, did I accidentally rhyme?)

After playing a bald man, Ayushmann is all set to essay the role of a gay man in Subh Mangal Zyada Saavdhan. The movie was scheduled to release on March 13 (eh! Too far), but now it has swapped its release date with Anurag Basu’s next untitled movie. The new release date has been preponed to February 21 (much better) and we are excited!

Valentine's plans are all set then.

"We are interchanging both the release dates of our films - Shubh Mangal Zyada Saavdhan and Anurag Basu’s next. Aanand ji and Anurag both have been very supportive with the change. Both our films are interesting and cater to families across all ages. We are ready to give our audiences a complete adventurous ride with both these films," Kumar said.

The movie is a spin-off to the 2017 hit movie Subh Mangal Saavdhan, which dealt with erectile dysfunction. This part will follow the lives of a same-sex couple in a small village. Ayushmann’s partner will be played by Jitendra Kumar.

"It's a complete family film and we want to meet the audience soon. We have now decided to release the film in the month of February, which is also the month of love," Rai said in a statement.

The makers released the first poster and the ‘Andhadhun’ actor looks his dapper self as he sports a red jumper and a super gelled hairdo. Have a look: 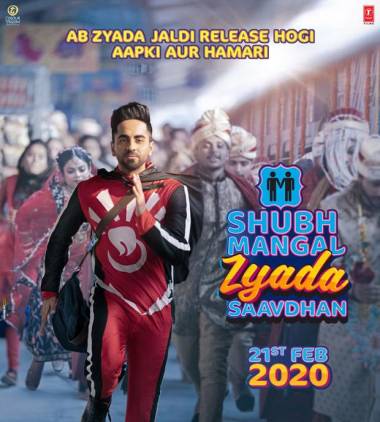