Mumbai: Friends turned foe, Kpail Sharma and Sunil Grover, were recently clicked together happily smiling with each other and that has made fans go berserk.
Kapil and Sunil, who had worked together in The Kapil Sharma Show and Comedy Nights With Kapil parted ways when things got uglier due to the infamous mid-air brawl. Ever since the two have not worked together while their fans have been eagerly waiting to see them with each other again.

It is, however, Salman Khan who should be thanked for bringing the two super comedians together in one frame. Salman had invited Kapil and Sunil to his brother Sohail Khan's birthday bash, held in Bandra. Both the comedians obliged the invitation and were present at the bash. Salman got a picture clicked with Kapil and Sunil and the snap was shared by Kapil Shamra himself. 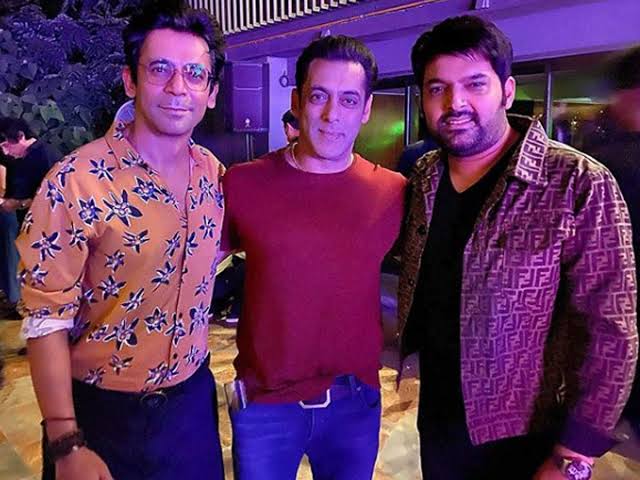 Kapil shared the picture on his instagram captioning it as '#BrothersNight'. Both Kapil and Sunil looked happy and cheerful standing together with Dabangg Khan. Fans, who were waiting to watch these two talents work together, said that it was only ';Bhaijan' who could do this impossible by bringing the two comedians together.

Sunil Grover, however, through one of his tweets had clarified that there are no plans of him collaborating with Kapil Sharma any soon.

It is to be mentioned that Kapil Sharma and Sunil Grover had made the audience laugh out loud with their comic timings while working together in shows 'Comedy Nights With Kapil' and the 'Kapil Sharma Show' but things remained not so good after some incidents and Sunil parted ways with Kapil and the show as well.