After teasing the audience with behind the scene pictures, the makers of ‘Good Newwz’ have finally unveiled the first look for the much-awaited movie.

Are you still upset about how things ended between the characters of Diljit Dosanjh and Kareena Kapoor Khan in Udta Punjab? Get excited because the two will be seen in the same frame again this December- in a happy setup. Kareena and Akshay Kumar have already proven to be a hit pair and fans are thrilled to see them together once again. Kiara Advani will be joining the three in what already looks like a hit!

Out of the three posters revealed, two of them feature the male leads squeezed between Kareena and Kiara’s baby bumps. While Akshay looks unpleased and almost horrified, Diljit looks delighted and thrilled. 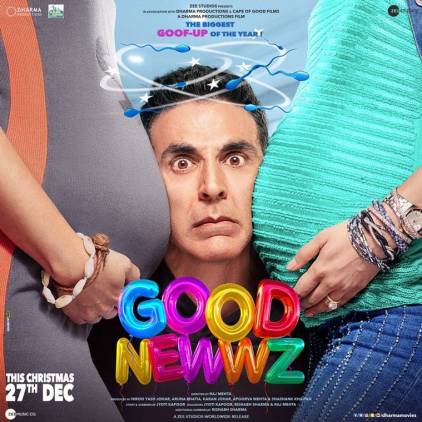 The third poster features the four together. Kareena and Kiara are sporting baby bumps and are looking their gorgeous selves and the male leads are dazed and confused. Also Read: This Is How Ranveer And Deepika Will Celebrate Their First Marriage Anniversary!

Sharing the posters on Twitter, Akshay wrote ‘Squeezing’ in some #GoodNewwz for you this #Christmas season. Stay tuned, the biggest goof-up of the year is coming!” He further added, “There’s always someone who ends up with the same #Christmas present as you!” and “The goof-ups are bound to multiply…and that’s how you get, #GoodNewwz!”

Producer Karan Johar also tweeted the posters with the caption, “Unwrap the best #GoodNewwz this #Christmas! These 4 are ready for a bumpy ride! In cinemas 27th Dec”

‘Good Newwz’ is a quirky, comedy-drama that revolves around two couples and their tryst with in vitro fertilisation. The movie will mark the debut of Raj Mehta as a director. The film is produced by Karan Johar, Apoorva Mehta, Hiroo Yash Johar, Shashank Khaitan and Aruna Bhatia under their respective banners Dharma Productions and Cape of Good Films.

The film will hit the theatres on December 27.