MUMBAI: A few days ago, people were shocked by seeing a picture of Ranbir Kapoor and Alia Bhatt’s wedding card. The picture went viral all over the internet and fans were going crazy. The same did not go unnoticed by the couple’s near and dear ones. Now, Alia’s mother and uncle have reacted to the fake wedding card. Rubbishing the news, mother Soni Razdan asked the media not to give any attention to those who spread this type of news for publicity. She said, “It’s a non-issue. Please, don’t give these miscreants more publicity than they deserve.”

Alia’s uncle Mukesh Bhatt too denied the rumours saying, “Alia is busy shooting for Sadak 2 in Ooty. I have got a call from all over the country inquiring about the same. How can it be real? It’s sad. There are so many mistakes on the card.” 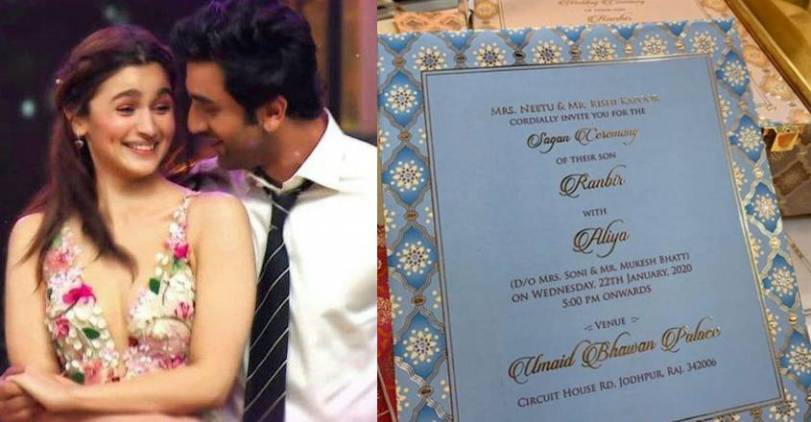 The invitation card had the details of the couple’s sagan ceremony that would take place on 22nd January next year in Jodhpur. However, we can spot too many errors on the card. The actress’s name was wrongly spelled as ‘Aliya’ and it mentioned her father’s name as ‘Mukesh Bhatt’ while she is the daughter of ‘Mahesh Bhatt’.

The rumour of Alia-Ranbir’s wedding is not new and it has been the talk of the town from quite a few months. Soni has previously reacted to such rumours saying, “Look, it is sweet of all their fans to ask everything about them. I am Alia’s mother. I really do not want to talk about my daughter’s personal life. I want her to be happy. And she has my love and blessing on everything she does, beyond that I want her to live her life the way she wants to. As a mother, I do not give her any ‘gyaan’ because my Alia is very sensible as an individual.”

Alia and Ranbir’s budding romance knows no bound and only time would tell the future of their relationship. On the work front, Alia is busy with projects like Sadak 2, Brahmastra and Gangubai Kathiawadi whereas Ranbir is engaged shooting for his upcoming movie, Shamshera.