Allu Arjun has reunited with filmmaker Sukumar for his 20th movie which is all set for a 2020 release. The AA20 film was formally announced with a pooja ceremony which was held on Thursday in Hyderabad. The actor was seen in a crisp, off-white kurta pajama, looking his usual dapper self.

Previously, Allu Arjun and Sukumar came together for the films ‘Arya’ and ‘Arya 2’. This will be their third collaboration and is expected to be as successful as their previous two films. ‘Dear Comrade’ actress Rashmika Mandanna will be playing the female lead in the movie and the music will be composed by Devi Sri Prasad.

The premise of the movie is said to revolve around the Red Sanders smuggling and will be set against the forest backdrop of Tirumala.

Sukumar’s last was both critically and commercially acclaimed and fans cannot wait to see what his upcoming has in store. Bunny will be seen in an all-new avatar in this rustic drama.

Allu Arjun is currently occupied with Trivikram’s ‘Ala Vaikunthapuramlo’. Shoot for AA20 will commence in November and it is being reported that Bunny will join in a month later. It is being speculated that Vijay Sethupathi will be playing the antagonist in the film.

Have a look at pictures from the Pooja ceremony 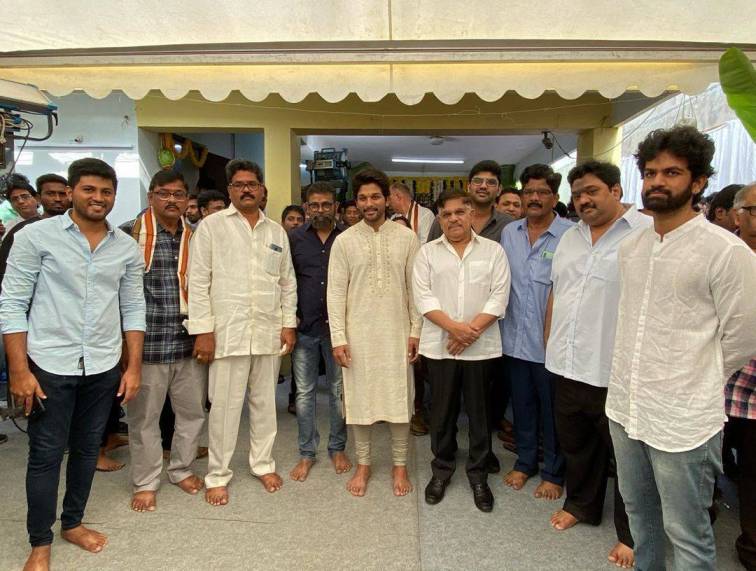