After Baaghi, Tiger Shroff To Carry Forward Another Franchise Of Heropanti

MUMBAI: Debut movie are always special for any actor and for Tiger Shroff, it became two times special as he is all set to star in its sequel 'Heropanti 2'. The first part starred Shroff along with another debutant Kriti Sanon and the movie was received well by the audience.

Both the posters that revealed the first look of Tiger have the actor in a full-on action mode with weapons and he looks absolutely dashing as well as dangerous at the same time. However, fans did not miss to point out its similarity to Keneau Reeves' 'John Wick 2' poster. So, another remake on the way? Maybe! 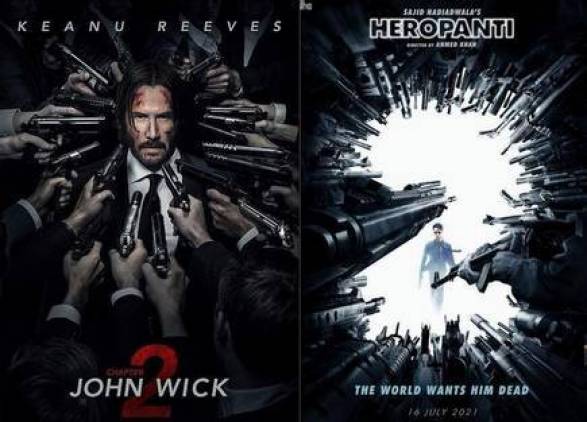 The movie is initially scheduled to get released on July 21st, 2021. So, remake or not, all you Tiger fans will surely be excited.

For now, Tiger will be seen in 'Baaghi 3' alongside his 'Baaghi' co-star Shraddha Kapoor and Riteish Deshmukh. He as Deshmukh's brother will be going against the whole country of Syria to save his brother's life who gets abducted there.

Also Read: I Gave Mr India To You, Wasn't Your Idea: Javed Akhtar To Shekhar Kapur

A new song "Do you Love me" was released recently that featured Shroff's rumored girlfriend Disha Patani. She sizzled in the song that was, guess what? Yes, another remake of the song "Do You" by Troyboi. "Bhankas", another song of the third installment of 'Baaghi' was a remake of Bappi Lahiri's "Ek Aankh Maaru" from 'Tohfa'. And yes, "Dus Bahane 2.0", the recreated version of "Dus Bahane" from 'Dus'.

'Baaghi 3' will be releasing on March 6th.