Wi-Fi on Planes: Welcome to The Future

e are all familiar with the protocol of switching off our mobile phones or keeping them in airplane mode while flight take-off. In doing so, we disconnect ourselves from the virtual world. Also, at such high altitudes it’s impossible to get network reception. So for that small duration of the flight time, we’re basically completely cut-off from the rest of the world. But that’s about to change. Or maybe it already has. What I’m talking about is the next iteration of first-in-class wireless internet technology available on flight now. As seemingly impossible it may sound, companies like JetBlue already have a functional Wi-Fi on-board, which, as per the company’s claims, can stream videos/movies seamlessly. So it’s not just about having in-flight Wi-Fi. It’s about making it better, faster, and cheaper.

Before we divulge into any further details, let me just remind you that the last time you checked, you had no cellular reception while en-route your destination. Right? This is because regular telephone networking doesn’t work when you reach a certain height. How, then, do airplanes offer an internet connection some 12 kilometres above the earth’s crust? There is a simple answer to this. Modern planes are equipped with antennas which allow them to receive signals from 2 sources: ground station or satellites. The first method uses a series of overlapping ground stations that constantly shoot cellular signals into the sky. Using a series of antennas situated in the underside of the aircraft fuselage, the plane picks up these signals. The connection forwards to a server and router situated on the aircraft and then broadcasts throughout the cabin. The major drawback to ground station in-flight Wi-Fi is the lack of coverage on any flight that crosses a large span of water or mountainous terrain. 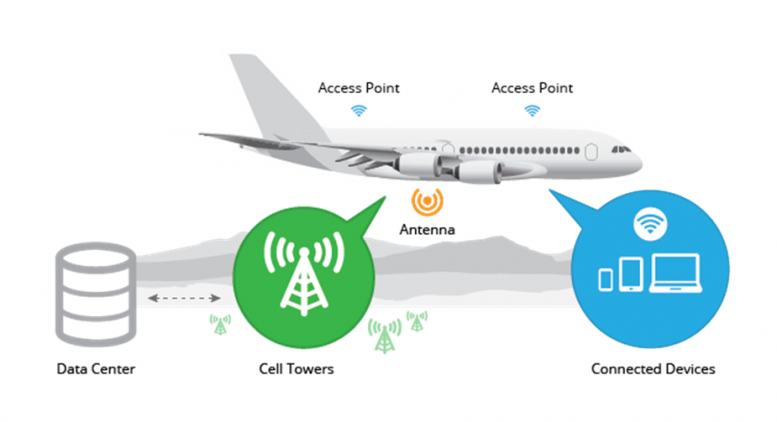 A diagram depicting the working of in-flight Wi-Fi.

Our flight tickets, as it is, cost us a bomb. Even a small item like a cup of noodles is exorbitantly priced. So, it makes sense when the airlines provide you with seamless connectivity, they kind of expect a substantial sum in return. With the added comfort of staying in touch with your loved ones while on flight, it’ll definitely hollow out your pockets. A few years back, travel blogger Ben Schlappig snapped possibly one of the worst in-flight Wi-Fi offerings of all time. Schlappig was flying business class on an Iberia A340 from New York to Madrid, which had on-air Wi-Fi.The cheapest Wi-Fi package offered 4MB for around $5. Each additional 100KB cost $0.17. Yes, you read that right: kilobyte. Considering, just opening a webpage consumes up roughly about 3MB or so, you wouldn’t be doing much of surfing, unless you want to shell out big bucks.

Another downside is the restriction of using certain sites. Airline Wi-Fi providers work with extremely limited bandwidth and must preserve the available data for other passengers. Sites which offer pirated apps/movies are completely off-limits, in case an unknown virus corrupts the passenger’s devices and ruin their flight experience. However, very recently JetBlue nowoffers every passenger the chance to stream high-quality Amazon Prime video direct to their device, and that’s on their free in-flight Wi-Fi plan.

JetBlue’s very own Wi-Fi provider, aptly called as the Fly-Fi.

With everything said and done, the only question which remains to be asked is; “Is it worth so much hassle?” And the answer is a variant across people from different walks of life. It’s not about bringing technology closer to us. It’s about making it a part of our lives. And occasionally, certain things seem good when kept at a distance. For every now and then, it’s best to just go offline once in a while. Sometimes, peace is not derived from having a high-speed internet connection on your device. Sometimes, it’s felt by soaking up the serenity of the beautiful, sun-kissed clouds.