The Nine Unknown Men: India’s Answer to The Illuminati

For those who see me everywhere and see all things in me, I am never lost, nor are they ever lost to me. For who, in this oneness of love, loves me in whatever he sees, wherever this man may live in truth, he lives in me.

ne of the most highly underrated shlokas from the Bhagavad Gita, it talks about a spiritual amalgamation between god and man. Not only are these lines profound, they are absolutely relevant in this day and age. And before you start wondering where exactly I’m heading towards with this, just take a quick look at the title again. And now since you’ve done that, let’s talk about what the title exactly means. As it suggests, this article is about 9 unknown men. Sounds intriguing, doesn’t it? And I’m willing to bet here, that only a handful of you know about these clandestine men. Lost in the sands of time, their story is the stuff of legends. You may have heard about the Freemasonry society. You must have read about the Illuminati. But today, I give you the 9 unknown men. It’s a story worth telling. It’s a tale worth reading. For today, I welcome you, to the world of India’s oldest, strongest and the highly rumoured, secret organization; The Nine Unknown Men. The great Mauryan Emperor, King Asoka, after the bloody battle of Kalinga.

Now this saga dates back to as early as the 260 BC, which is roughly 2000 years ago. After the bloodiest battle ever fought in the history of ancient India, which is the Great Kalinga War, Emperor Asoka was so much devastated and deeply disturbed after seeing the aftermath, that he completely renounced violence, and took up Buddhism. He became a fervent supporter of this religion, and did everything in his might to spread it far and wide. Now, everyone is familiar with this story. It has been taught to us, since the early days of our childhood. But what everyone doesn’t know, is how, even after his death, Asoka had managed to keep his legacy alive. So committed was the Emperor to his mission that he sought to prevent his fellow men from putting their intelligence towards perpetrating evil, particular the evil involved with warfare. The task of collecting, preserving, and containing all knowledge was too great for one emperor to do alone. So Asoka summoned 9 of the most brilliant minds in India at the time. For security purposes, the identity of these men was never made public. Together, these geniuses formed a secret society that came to be known as the Nine Unknown Men. 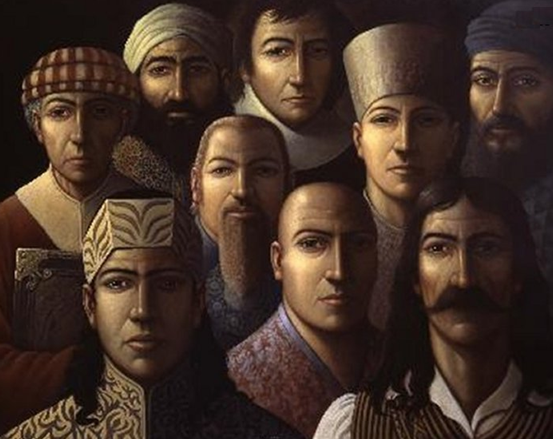 A concept image depicting the 9 men, hand-picked by the Emperor himself.

The organization set up amassing all of the scientific knowledge they could, from natural science to psychology to the composition of matter. Fearing that if ordinary men were entrusted with such knowledge they would use it for destruction, only the Nine Men were allowed to study and develop scientific theories and technology. To better accomplish this intimidating task, each of the nine was assigned with a specific book that he was to update, revise, and ultimately perfect the knowledge therein. When one of the nine could no longer complete the task – whether from the wish to retire, fading health, or death - the obligation was passed to a chosen successor. The number of members in the society was always to be nine. Not one more, not one less. Exactly 9. The original book written by English writer, Talbot Mundy, in 1923.

Speculation about the contents of each of the nine books varies widely. Talbot Mundy, an English writer, published a book entitled The Nine Unknown Men in 1923, which contained a list of the nine books. The list, which has come to be generally accepted worldwide, is as follows: With all said and done, the question here is: “Do these men really exist?” And honestly, not a single person on this Earth can tell you that. Who knows, maybe you and I are a part of this organization, but we’ll never find out. For every time, a system topples, they restore balance. And this brings me to the opening shloka of this article. Asoka not only set up this structure for our country, but he managed to immortalize himself as well. And maybe they’ve been controlling our society for centuries now, and maybe they’ve always been operating from behind the shadows. And if they do exist, then we need to trust them. For in Asoka, lived an idea of a great nation, and in them, lives Asoka.