“The quest for riches, darkens the sense of right and wrong.” - Antiphanes

ometimes, we believe in the impossible. Not because it sounds convincing enough. But because its possibility intrigues us. For, we live in a country whose history is as varied and diverse as its citizens. At one point of time, India was called the Land of the Golden Bird. Our income then, was higher than the entire treasury of Great Britain. The British rule not only made us slaves in our own country, but it deprived us of our inheritance. The Kohinoor diamond adorning the crown of Queen Elizabeth II, is just a tiny piece of the puzzle. The British not only took away our freedom. They took away our prized possessions.  They stole our wealth. But most importantly, they destroyed our legacies. The eastern peripheral of the Son Bhandar Caves.

But, today I’m going to talk about something which will catch you off-guard. For those of you reading this, allow me to introduce you to India’s very own Treasure Island; The Son Bhandar Caves. These caves, situated in Bihar, house one of India’s most intriguing mysteries. Legend has it that there is a surprising amount of gold hidden inside the walls of the caves. It is said that there is a passage inside the cave leading to the treasure, but no one has ever been able to find it. Several attempts have been made to find the ‘supposedly’ hidden treasure but in vain. Over the years, these caves have gained notoriety for being the locked doorway to the possession of unlimited wealth. The Son Bhandar caves might as well be just a bunch of ordinary caves, but then that would just destroy their very mystery. And what’s life without a little bit of mystery. The purported inscriptions in Sankhlipi, which when decoded, will open the doorway to the treasure.

Built during the rule of the Mauryan Empire during 319 to 180 BCE, these are two artificial caves located in Rajgir in the state of Bihar in India. The Son Bhandar caves can be divided into two segments – the Western Cave and the Eastern Cave. The Western cave is seen as the guard room, containing a single chamber in a rectangular shape, with dimensions 10.4m x 5.2m. The arched ceiling standing on the vertical walls, has a vault located at a height of 1.5 m. This reflects the ancient Mauryan style of rock cut sanctuaries.

The southern wall of the caves carries six miniature figures of Jain Tirathankaras also including Parswanatha, Padmaprabha, and Mahavira as well. Also, the walls of the Son Bhandar caves contain inscriptions in the shell script or Sankhlipi and are also believed to throw clues to open the entryway for the treasure. Believed to house the riches of Bimbisara, a Magadhan king who loved hoarding treasures, these caves were built to hide the riches of the king on his wife’s order, after he was imprisoned by his own son, Ajatashatru. The undeciphered Sankhlipi inscriptions, etched on the cave walls, spell out a password, which when decoded, will allow the person to unravel the secret route to the hidden treasure. One interesting trivia related to the Son Bhandar caves is a big black mark on one of its walls. This mark is reminiscent of an attempt by the British to cannonball their way through the purported doorway, only to fail. 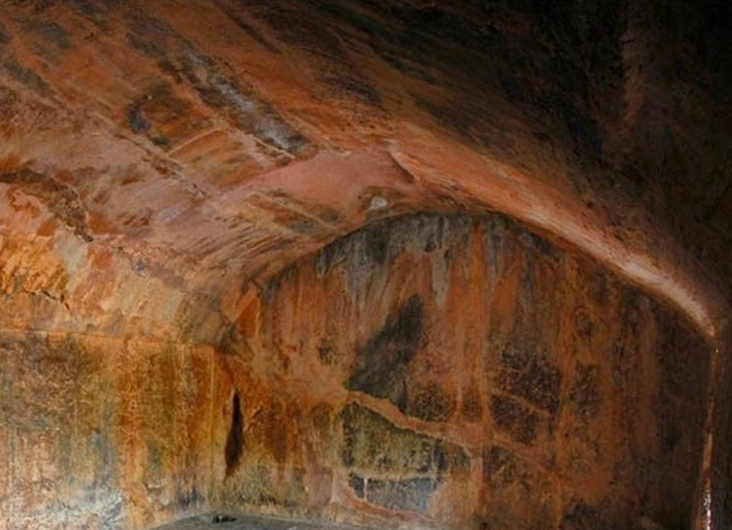 The black spot, a remnant of the cannonballing attempt by the British.

The Son Bhandar caves are like one of those unsolved mysteries where the premise is very interesting but the climax is just an open ending. No one can know for sure if these caves are actually “stores of gold”, but as long as they are shrouded in mystery, their prominence is always intact. And sometimes that’s the only thing that matters. Their secret keeps them alive. Maybe sometime in the distant future, someone will unravel their secret, but until then, it’s best to leave things the way they are. It’s not always about uncovering obscurities. Sometimes it’s best to revel in the fact that these stories might be true after all. For, it’s not about decoding secret messages. It’s about preserving their essence.