Nagaland: The Land Of Falcons, Festivals And Tribes

onstituting of a conglomeration of almost 16 tribes, the state of Nagaland is located amidst the high lofty mountains flaunting the northeastern part of India and sharing boundaries with the Kingdom of Myanmar.

The Naga Hills are also referred to as the extensions of the Eastern Himalayas.

Known for having the most breathtaking flora and fauna of all times, Nagaland flaunts a host of different kinds of birds as well.
The state is referred to as the land of the Amur Falcons, the migratory species visiting the only major river in Nagaland – The Doyang river.

Apart from that, Nagaland is also known for its various festivals (which we would be discussing later in this article), mesmerizing valleys, mountain ranges, and the long stretches of tea gardens adorning the nature abundant state.

The People of Nagaland

The Nagas, (derived from the Burmese word “Naka”) or as the people of Nagaland are commonly referred to as, once were known for being brave warriors of the past with the headhunters flaunting enormous tattoos. And now they are the perfect examples of absolutely warm and welcoming hosts.

Visit a Naga tribal home in the smallest towns of eastern Nagaland, and you would possibly get to hear the famously flamboyant and deadly head hunting stories from a few of them.

Headhunting was earlier a prevalent tradition in order to showcase a tribe’s supremacy over the others, by taking off the head of their enemies. The practice is obsolete, has now been banned altogether.

The Nagas are mostly Christians with all the tribes having different languages, but similar dress codes, law and order, and cuisines as well.
You can also find a mix of Hindus, Muslims, Sikhs, Jains and a few Naga folk religions in this land forming a minority.

The Naga traditions with its rich cultural heritage have been preserved to date owing to the fact that the British, during their colonial reign completely avoided the interference with the Naga Tribes. 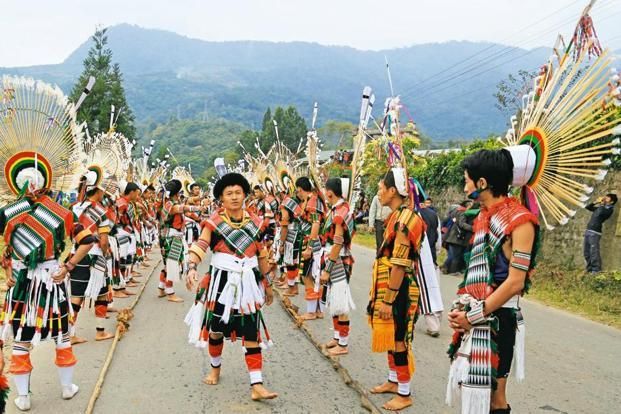 Marriages and Rituals Being Followed

One more interesting fact about the Nagas is their marriages and relationships culture.
If you think marriages are made in heaven, you definitely need to have a look at the different Naga traditions and customs when it comes to making the perfect match.

Here are a few examples where you can witness the varied cultural differences amongst all of the tribes of Nagaland itself.

1. The only common thing in all of the tribal cultures is that a boy or a girl can marry only outside of their social clan, or else it is considered as a social taboo.

2. The Angami Tribe has some atypical rituals such as strangling a fowl and deciding if a couple could marry depending upon the posture of the fowl while dying. If the fowl displays an ominous pose, then the marriage is immediately called off.

3. Prior to making the match determined by the Fowl’s posture, the Angami boys can show their fondness for the girls by apprising about the same to their fathers, who then convey the message to the girls’ parents through a friend. And then the fowl strangling ritual takes place if the girl’s parents approve of the match.

4. An Angami Girl can also break the marriage if she happens to see an ominous dream.

5. The Angamis also allow for pre-nuptial relations bounded by a few limitations for the couple to follow.

6. The Mongsen tribe follows a different tradition when it comes to making the perfect matches. They send the couple on a trade excursion of 20 days. If it turns out profitable, then they are considered a perfect match, but if it doesn’t the idea of getting married is completely ruled out by the elders.

7. In some of the tribes, the girls are also made to shave off their heads until they reach marriageable age.

8. Another prominent example being of the Sema community where the girls are taken complete care of since their parents receive an enormous dowry from the bridegrooms.

9. Tribes like Changs, Sema, and Lothas allow for men to have multiple wives.

Shawls being their famous attire you can find a variety of them adorned by different communities displaying different traditions and social status, such as Shawls of Lothas, Rongsu Shawls, Yimhunger Shawls, Ronkhim Shawls, etc.
Angami women wear a Vatchi (Sleeveless top), A Pfemhou (white skirt) and a Neikhro (Petticoat).Some women from other communities also adorn White and blue cloths with black bands bordering the cloth. Or like in the Zemei community they would wear white skirts and tops with black and red borders. Men would prefer wearing embroidered Black kilts and the respective Shawls.
Accessories also include bangles, neckpieces, which can definitely steal your gaze, accompanied with many tattoos on the bodies of the Nagas.

Rice being the staple, the Nagas indulge into a variety of meats such as Fish, snails, smoked pork, etc. and fermented ingredients as well. Mostly they boil all their meat along with the vegetables and various homegrown herbs and spices.

Their curry base usually consists of Potatoes and tomatoes. Their ginger has a very unique and spicy taste, which enhances a lot of their dishes, along with the spiciest of the chilies famously known as the Bhut Jolokia. The land of festivals is rightly known so for it hosts one of the best festivals throughout India, which has recently found much recognition and has also led to an exponential rise in the tourism of the state, which is the Hornbill festival.

The most famous festival of Nagaland is the Hornbill festival being organized by the state government in Kohima, the capital city, in order to preserve the cultural heritage of all the 16 tribes of the Nagas and also encourage more tourism.

It is held in the first week of December for about 10 days.

Several activities are also a part of this festival like: 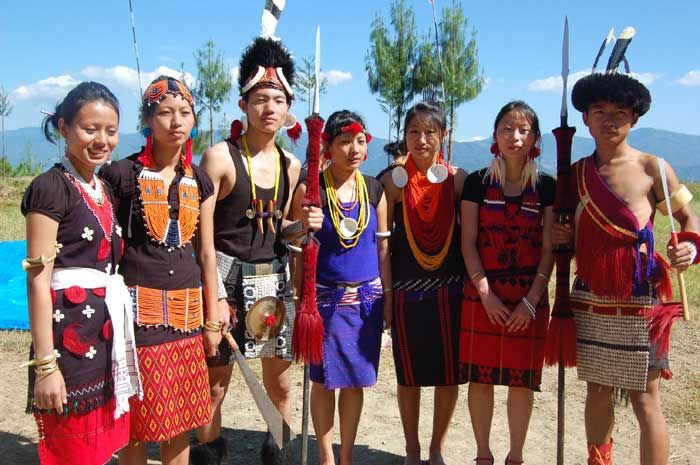 Similarly, the Angamis celebrate the Sekrenyi festival in the month of February displaying a few traditional rituals and performing activities like Dance music, etc.

Marking the completion of the sowing process, the Ao tribe celebrates this festival with various rituals and customs followed in the first week of May.

Thus the state of the Nagas adorns a varied cultural heritage that one must experience as closely as possible. And that could be done only if you try to stay with a tribal Naga host.

Experience their vibrant culture full of zest and energy, along with the scintillating flavours of their cuisines amidst the verdant flora and fauna.

That’s Nagaland for you!